A book , The Girl in Building C: The True Story of a Teenage Tuberculosis Patient has been published by the Minnesota Historical Society Press.  Researcher and historian Mary Krugerud edited and annotated the letters that Marilyn Barnes wrote to her parents from Ah-gwah-ching Sanatorium.  Written during her three-year stay, they tell of uplifting life experiences and sober encounters with death. The letters are supplemented with information supplied by Marilyn during interviews in 2017. The Girl in Building C ​ has been nominated for a Minnesota Book Award, with finalists to be announced in January 2019.

A caretaker's cottage was built in 1906 and the first brick building, later known as "D,"​ opened in 1907. Four sleeping cottages were added in 1910, with large screened windows and canvas coverings. Two cottages were built for employees. Each cottage was heated with a central wood stove. Other buildings were added: Administration in 1912; Staff House,  "A" Building, recreation hall, and power plant in 1915; greenhouse in 1921; weather station and Infirmary or "B" building in 1923, Engineer's Cottage in 1925, Hall Pavilion/Children's Cottage in 1928; Nurses' Home in 1930, "C" Building in 1932; Power house garage in 1935.

The site chosen for the state's sanatorium followed the template of the time:  It was located in the pine region near an Indian reservation, in an area that had been logged and was being reseeded. The region was sparsely settled and thus lessened chances of contaminating an existing population. There was a good supply of pure water and an area large enough for a farm to support a dairy herd and vegetable gardens. Unfortunately, it was 180 miles from the population centers of Minneapolis and St. Paul, a distance that could prohibit many families and friends from visiting the patients. The isolation made it extremely difficult to recruit and retain competent help.

In 1922, the name was legally changed to Ah-gwah-ching, an Objibwe phrase meaning out-of-doors.  In 1934, the Chippewa Indian Sanatorium at Onigum on Leech Lake burned and the patients were transferred to Ah-gwah-ching. A Federal Government building for tuberculous native Indians was already under construction and the "E" or Eagle Building opened in 1935. Also in 1935, a Penal Camp was established in connection with the St. Cloud Reformatory. Inmates did many jobs on the grounds, and the camp operated until 1946.

The medical staff was involved with outreach programs, especially to the Ojibwe people on nearby reservations.  The sanatorium had a bed capacity of about 360, and it served more than 14,000 patients before it closed in 1962. The campus itself continued on as a state-operated nursing home for a couple of decades. That, too, closed. The facility was added to the National Register of Historic Places in 2001, but all buildings were demolished except for the Weather Station gazebo. 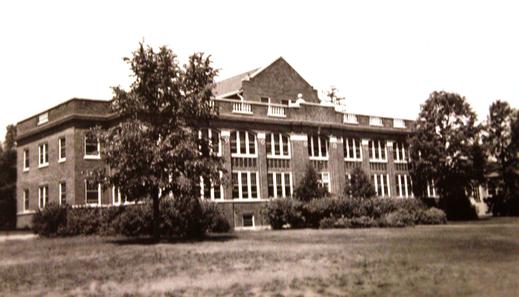 "B" Building or Infirmary