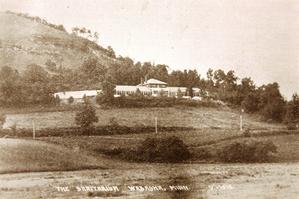 The Buena Vista Sanatorium opened in 1917 on a hill overlooking the city of Wabasha to serve residents of Wabasha County.  Several patients came from neighboring counties, especially Winona and Olmsted. Beginning in 1921, Wabasha and Winona counties together operated the sanatorium.

The sanatorium struggled financially throughout its existence because the 30-bed capacity did not generate enough income for upkeep and salaries. In 1927, 69 percent of the patients were "free pay," which meant their cost of care was paid by state aid of $5 per week. The cost of care per patient, per day, was $3.45 at that time. As one of several cost-saving measures, three nurses worked eight-hour shifts, with one-half day off each week and one day off each month.

Assistance was requested from the Works Progress Administration to erect an additional building, but funding was denied because there was not a sufficient number of unemployed skilled construction laborers in the two counties to justify WPA support.

One of the longest serving medical directors at Buena Vista was Dr. Russell Frost, whose grandfather founded the state's first anti-tuberculosis society in Willmar.  Dr. Frost served an internship at Ancker Hospital in St. Paul, contracted tuberculosis and recovered, was on the staff at Glen Lake Sanatorium for a short time, and then worked at Buena Vista from 1928 to 1939.  After a medical directorship in Louisiana, he entered the Navy during World War II and then returned to Minnesota, where he worked at the Veterans' Administration Hospital and at Glen Lake Sanatorium.

Buena Vista's superintendents and medical directors worked within their limited means to provide occupational therapy and other supplemental services to patients. The sanatorium also supported the work of county nurses to identify and isolate tuberculosis in the early stages. Because Buena Vista accepted patients with only incipient or moderately advanced cases of tuberculosis, the ratio of deaths to admissions  was relatively low.  In 1956, the buildings were converted to the Buena Vista Rest Home, which has since closed. The site now consists of private residences.