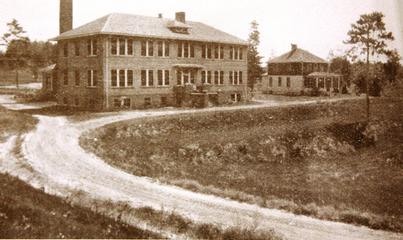 Deerwood Sanatorium officially opened on October 1, 1918, to serve Aitkin and Crow Wing counties in Minnesota. It was built midway between Aitkin and Brainerd in order to be fair to the counties' two largest cities. This placement also put it almost three miles from the nearest railroad depot in the town of Deerwood, a common mode of transportation for visitors.

The sanatorium never exceeded its opening capacity of 24 beds.  Because It was not large enough to provide modern medical procedures as tuberculosis treatment evolved, patients were often transferred to Glen Lake or Nopeming sanatoriums for surgery. There were several superintendents and medical directors. Dr. E. G. Hubin served the longest, from 1931 to 1946.

Deerwood Sanatorium ceased operation on February 21,1951, with the remaining patients transferred to Nopeming Sanatorium near Duluth.  The main building was converted to a nursing home, Cedar Brook Manor, in 1952. After the nursing home closed in the 1970s, the site was used for a skating rink and hockey camp.