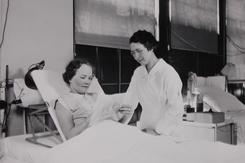 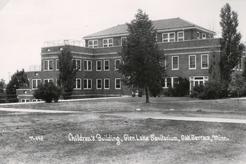 Glen Lake Sanatorium, about 1927. The main building, with east and west wings, is south of the original stucco cottages. The Children's Building is at the upper part of the photo, set apart from the other buildings. 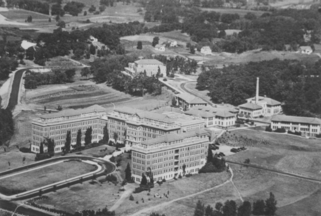 Glen Lake Sanatorium opened in 1916 to serve Hennepin County, with Minneapolis as the nearest major metropolitan area. Glen Lake's initial capacity was 50 beds contained in two stucco cottages. It grew into the largest sanatorium in Minnesota with an average patient census of 706 in 1933. The sanatorium was located at Oak Terrace, which was later absorbed into the larger city of Minnetonka.

In 1927, Glen Lake became the first U.S. tuberculosis sanatorium accredited by the American College of Surgeons under hospital standards established in 1921. By meeting  the ACS’s minimum requirements for certification, the sanatorium was able to partner with several colleges and universities in the instruction of nursing and medical students.

Through a "bed contract" arrangement with the Veterans' Administration Hospital, Glen Lake cared for many veterans after World War II and was one of two non-federal hospitals that participated in VA streptomycin trials in the mid-1940s. Through an affiliation with Mayo Clinic, the sanatorium also hosted doctors from all over the world who came to the United States on medical fellowships for training in tuberculosis.

Dr. Ernest Mariette served as medical director from 1916 to 1949. Under his direction, the sanatorium instituted several programs that were unique for the era:  selective diets, on-site social workers, vocational education, inter-library loan service, and a staff statistician.

Glen Lake operated a separate Children's Building that functioned as a preventorium, hospital, and school for children who tested positive for tuberculosis. Many of the patients in the Children's Building had parents who were being treated in the main building. The sanatorium also had a separate summer children's camp for youngsters who were at risk of developing tuberculosis because of exposure at home.

The sanatorium became a state-operated nursing home in 1961, but cared for tuberculosis patients until 1976.  Oak Terrace Nursing Home closed in 1991. The buildings were demolished in 1992 with the exception of two summer camp buildings in Eden Prairie, which are listed on the National Register of Historic Places.

Author Frederick Manfred, who was a patient at Glen Lake in the early 1940s, based his book, Boy Almighty, on his stay at Glen Lake. Harry Wilmer, M.D., a roommate of Manfred's, published a popular children's book about tuberculosis, Huber the Tuber.

Interrupted Lives: Tuberculosis in Minnesota and the Glen Lake Sanatorium,​ by Mary Krugerud, was published by North Star Press in September 2017 and is available on their website.  It is also available on Amazon and Barnes & Noble  and at the ​Hennepin [County] History Museum at 2303 Third Avenue South in Minneapolis.

More information is on Wikipedia at Glen Lake Tuberculosis Sanatorium.
​

Store for patients to shop in. John Naslund, proprietor 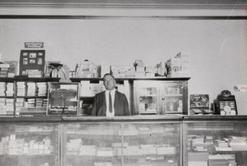 1930s:  Children getting sun therapy in the winter 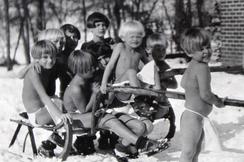