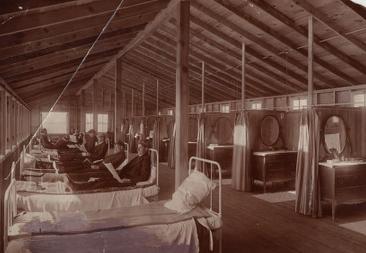 In 1907, Hopewell Cottage opened in Minneapolis to care for up to 20 tuberculosis patients.  Mrs. George H. Christian is given credit for convincing the City of Minneapolis that it needed additional tuberculosis beds, resulting in the construction of Hopewell near the Mississippi River, built on land donated by William Hood Dunwoody. On opening day there were more applicants for admission than the cottage could hold.

Fresh air and sunshine were key components of treating the disease in the era before  antibiotics. Hopewell was built in the traditional style. The sleeping areas were on the south side of the building, which had large windows having nothing more than canvas for a covering. The bitterly cold Minnesota winters meant that patients would sleep wearing layers of clothing, under several woolen blankets.

In 1912,  the Minneapolis City Hospital assumed operation of Hopewell and a new three-floor building

added 95 beds. The cottage still accommodated 20 people. The first floor of the new hospital housed 15 men and 10 women who were transferred from Mercy/St. Mary's Hospital, the second floor had beds for 33 men, and 33 women could be cared for on the third floor.

Hopewell primarily served indigent people with advanced cases of tuberculosis. No wonder, then, that Kathryne Radebaugh, education secretary of the Hennepin County Tuberculosis Association, commented that patients regarded Hopewell Hospital with a “rather chill feeling” and saw it not as a place to go for cure but rather as a place to die.

In 1923 the name was changed to Parkview Sanatorium to better define what type of institution it was. It closed the following year and most patients were transferred to the county sanatorium, Glen Lake at Oak Terrace. The building was used for several years as a non-tuberculosis public charity hospital. The structures were eventually demolished, and the land is now part of the regional park system.