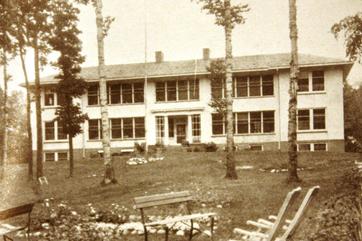 Lake Julia Sanatorium opened in 1916 in Puposky, Minnesota, a small community near Bemidji in the northern part of the state. Lake Julia's original capacity of 25 doubled to 50, and it served four counties: Beltrami, Hubbard, Itasca, and Koochiching.  From 1916 to 1922, the sanatorium had six administrators.

In 1921, Dr. R. L. Laney was appointed superintendent at Lake Julia, and he arrived to discover a typhoid epidemic.  Several people, including a nurse and a physician-patient, had died. Dr. Laney traced the epidemic to a typhoid-carrier patient who had polluted the lake's water, which was being pumped into the sanatorium's plumbing because its well had malfunctioned.  He quickly arranged to have two standby wells drilled and had the original well repaired. He also brought stability to the institution by staying for nine years.

After Dr. Laney's departure in 1930, Dr. Mary Ghostley was appointed medical director and superintendent at Lake Julia. She earned her Doctor of Medicine degree at the University of Minnesota in 1909 and practiced medicine at International Falls before arriving at Lake Julia. She became especially accomplished at reading x-rays and contributed to the control of tuberculosis in the four-county area through her examinations of people who reacted positively to TB tests.