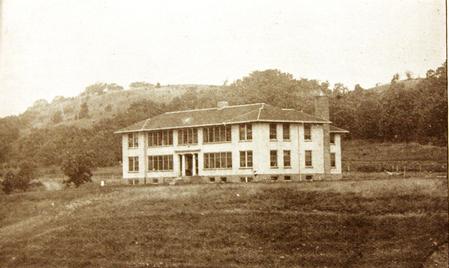 Mineral Springs Sanatorium opened near Cannon Falls, Minnesota, in 1915, at the end of a long and winding road near the Cannon River.  It originally served only Goodhue County, but joined with Dakota and Rice counties in 1921, Olmsted in 1927, Freeborn in 1928, Mower in 1929, and Steele and Washington in 1946.  Its capacity of 34 increased to 100.

Mineral Springs benefited from its proximity to the Mayo Clinic in Rochester, with several of its physicians available to patients on a consultant basis. The nearness also had a downside, because nurses could obtain a larger salary at the Clinic. As a result, the sanatorium found it difficult to maintain an adequate nursing staff.

Mineral Springs Sanatorium played a significant role in the development of streptomycin as a cure for tuberculosis. In 1944, Dr. Corwin Hinshaw, from the Mayo Clinic Section of Medicine, and Dr. William Feldman, a research veterinarian at Mayo, received a small amount of streptomycin from Dr. Selman Waksman and Albert Schatz. Experiments with guinea pigs demonstrated that streptomycin could suppress tuberculosis.  Patricia Thomas, a patient at Mineral Springs, agreed to be the first human "guinea pig" to receive streptomycin. She was experiencing rapid deterioration with an expectation of imminent death. Patricia began a course of injections in November 1944. She improved clinically, and x-rays showed a regression of the disease. Patricia continued to test positive for several months, however, so she wasn't discharged from Mineral Springs until 1947. She lived another 20 years.

Mineral Springs Sanatorium was briefly used as an adolescent treatment center but was abandoned in the 1980s. The buildings were demolished in 1991, with the exception of the administrator's house. The sanatorium campus is now the site of several private homes.