Otter Tail  Sanatorium was the third county institution to open its doors to patients.  Its November 4, 1913, dedication attracted citizens from the nearby towns of Fergus Falls, Pelican Rapids, Parkers Prairie, Perham, and New York Mills. A newspaper article about the opening reported that patients would be sleeping in open air porches both winter and summer, and five blankets had been issued to each patient. Most of those porches were later enclosed, although the photo above shows a porch remaining at the side.

Otter Tail Sanatorium remained small, expanding only from 37 bed capacity to 48 beds. In 1954, patients were moved to the Ah-gwah-ching State Sanatorium at Walker. The building was used as a nursing home until a new building was constructed. The original sanatorium was torn down in 1979. Otter Tail Sanatorium is  believed to be the only county sanatorium that had a cemetery. No one came to claim the bodies of some patients who died, and they were buried in a small plot across the road from the sanatorium. Efforts have been made by the Otter Tail County Historical Society to identify and mark the graves. 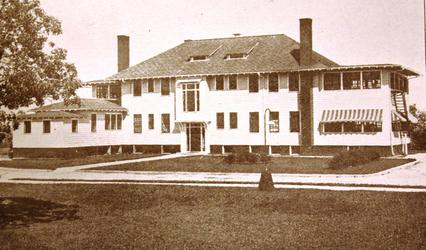