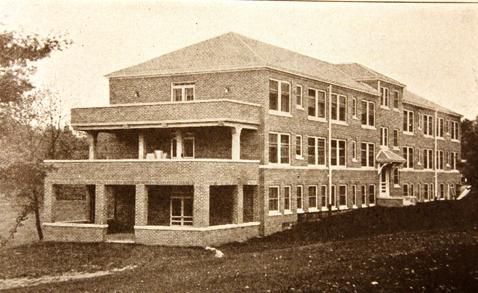 ​​Dr. Henry Longstreet Taylor was an active anti-tuberculosis crusader in Minnesota. In 1902 he had worked with doctors Ancker and Boeckmann to establish a tuberculosis ward in the City and County Hospital in St. Paul. In 1903 he established a tuberculosis ward in Luther Hospital at John and Tenth streets, also in St. Paul. He served on legislative committees that studied potential construction of public sanatoriums. He became frustrated with the slow pace at which state government was dealing with a serious health problem. In 1905 he used his own money to open a private institution near Pine City. It was named Pokegama Sanatorium for its location on the lake of that name. Pokegama is an Ojibwe word meaning "at the side."

Pokegama catered to patients who could pay their own way. Rates per week ranged from $30 to $50. When the county sanatoriums opened, their rates ranged from free for the indigent person to $7 for those who could pay. Pokegama also furnished electric blankets for each bed, rather than the five to 10 woolen blankets issued at the county institutions. Stock market quotations were available for the businessmen.

Pokegama was built with 15 open-air cottages, but in 1918 new cottages were added. They had steam heat with private bedrooms and bathrooms shared with only two or three people. A reception hospital added in the early 1920s contained a modern surgical suite, a long-distance telephone system, and elevators.

Pokegama's most famous patient-in-residence was Dakota County attorney Harold Stassen who was there in 1930.  He was elected governor of Minnesota in 1938.  Dr. Taylor died in 1932. His sanatorium closed in 1944 when World War II created shortages in both supplies and staff.