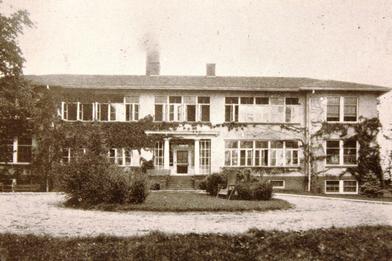 The Sand Beach Sanatorium was originally named Clay-Becker, after the two counties that formed the sanatorium district.  It was renamed soon after opening on December 6, 1916. It started with beds for 26 patients and later expanded to 42 beds.

Like the other small sanatoriums, it was hindered from the beginning by its small size and remote location.  Lake Park is 13 miles from Detroit Lakes, the nearest large town.  The train station was almost two miles away from the sanatorium, and the superintendent would use his personal car to pick up patients and visitors who arrived by train. In the years from 1916 to 1945, the facility had 12 different doctors serve as the medical director. A couple of them stayed less than a year.

In April 1951, the county commissioners voted to discontinue the sanatorium and reopen the facility as the Sunnyside Rest Home for the Aged. The Sunnyside Care Center is operated by  Becker County at the site of the former sanatorium.

​Sources:  Invited and Conquered​ by J. Arthur Myers, Webb Publishing, St. Paul, 1949, and articles from The Detroit  Record and The Detroit Lakes Tribune.