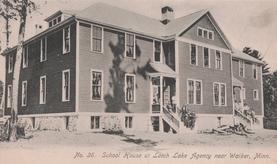 In 1910, the Commissioner of Indian Affairs to the Secretary of the Interior conducted a study of Indian reservations and schools. In Minnesota, that included the Chippewa (Ojibwe) bands of Fond du Lac, Grand Portage, Leech Lake, Nett Lake, Red Lake, and White Earth. Among the findings reported in 1912 was the mortality rate from tuberculosis, which was three and one-half times as great as among the general U.S. population. Because Indians weren't citizens (not until 1924) the state was reluctant to accept them into sanatoriums without reimbursement for care. Later studies indicated that the average incidence of tuberculosis in the Native American population from 1925-1929 was 700 per hundred thousand. That was approximately six times the tuberculosis mortality in the state as a whole. It is probable that the rate was even higher, with additional deaths unreported. In 1923, Dr. Albert Chesley, executive director of the Minnesota State Board of Health, appointed a Chippewa (Ojibwe) Indian public health nurse to work on the Leech Lake Reservation. Marie Broker Hoffman, the first nurse, was succeeded by Elizabeth Sherer.  Josephine Pariseien did similar work on the Red Lake Reservation. Other public health nurses of Indian descent in the 1920s and 1930s were Theodora Davis, Mary Martin, and Adelia Eggestine.

Several people in Minnesota's public health organizations persuaded the U.S. Congress to create a sanatorium for the Indian population. A former boarding school for Indian boys at Onigum in Shingobee Township on Leech Lake was subsequently remodeled by the Indian Medical Service. It opened in 1924 as an 85-bed tuberculosis sanatorium. It lacked x-ray equipment or a full-time physician, but it did raise awareness of the problem of tuberculosis among the reservation population.

In 1933, the State of Minnesota deeded land at the Ah-gwah-ching Sanatorium near Walker to the United States government for the purpose of adding a wing specifically for tuberculous Indians.  On January 29, 1935, the wooden sanatorium at Onigum burned. All patients were successfully evacuated and transported on sleds across the frozen Leech Lake to Ah-gwah-ching. They were temporarily housed in summer camp cottages until the "E" building, also known as the Indian or Eagle building, was completed that spring.

Sources: Adelia Eggestine, Public Health Nursing Work among the Minnesota Indians, 1929, and Rise and Fall of Tuberculosis in Minnesota: The Role of Infection​ by Leonard G. Wilson, 1992.

This boarding school at Onigum was remodeled and used as a sanatorium for Native Americans from the Chippewa (Ojibwe) bands, 1924-1935.