In 1923, Dr. Albert Chesley of the Minnesota State Board of Health received funding to support Native public health nurses to provide care on the Leech Lake and White Earth reservations. In 1924, the doctor and some influential citizens persuaded Congress to appropriate funding to remodel a former boarding school for boys near Leech Lake and open it as a tuberculosis sanatorium (see Chippewa Indian Sanatorium, Onigum).

The Onigum sanatorium was inadequate, and Congress was asked to support construction of a building dedicated to tuberculous Indians patients at the nearby Ah-gwah-ching State Sanatorium. The E Building, also known as the Indian or Eagle building, opened in 1935. It was constructed by the Public Works Administration via an agreement between the federal government and the State of Minnesota. The federal government purchased an acre of sanatorium land for one dollar so that federal Indian Bureau funding could be used for the care and treatment of the Native patients. In addition to 117 patient beds, it had a diet kitchen, dental office, washrooms, and utility rooms. On one floor a jail was built to house federal prison system inmates in Minnesota who had tuberculosis. A classroom was added in 1946, and all patient-students took classes there. Ownership of the land transferred back to the state in 1961.

Report of the Commissioner of Indian Affairs to the Secretary of the Interior for the Fiscal Year ended June 30, 1912. Washington: Government Printing Office, 1912. 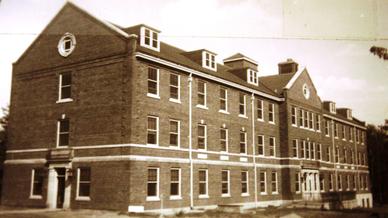