Tuberculosis control in Ramsey County and the City of Saint Paul began in 1872 with the purchase of a 10-room mansion to house poor people who were sick. Wings were added to the house to provide separate wards for people with contagious diseases. Two doctors, Arthur Ancker and Henry Longstreet Taylor, were responsible for most of the anti-tuberculosis efforts in the city and county. Ancker became superintendent of the hospital in 1883, and Taylor directed the operation of the tuberculosis ward.

When Luther Hospital was opened in 1903 in a building at John and Tenth streets, the tuberculosis patients moved there and Taylor became the medical director. In 1910, the doctor helped open Cuenca Sanatorium on Bass Lake and a summer camp for tuberculosis patients in White Bear Lake. In 1914, a tuberculosis wing, called a pavilion, was added to the new City and County Hospital (later renamed Ancker) which was located on West Seventh Street. The addition was designed with large windows and top floor porches for maximum exposure to fresh air and sunshine. In 1929, an auxiliary unit was opened for additional tuberculosis patients, bringing the total capacity to almost 200 beds. Because of its co-location with the hospital, the Ramsey County Sanatorium focused more on diet and surgical intervention than most other sanatoriums in the state.

By 1951, the tuberculosis wing was mostly unused and part of it was remodeled into a pediatrics department. Tuberculosis patients taking chemotherapy were absorbed into the general patient population.

The hospital moved to Jackson Street and University Avenue in 1965, was renamed St. Paul-Ramsey, and then renamed Regions Hospital. The original site on West Seventh was sold to the St. Paul School District. 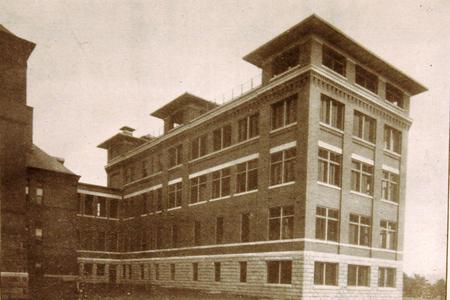