Later that year, Charles D. Gilfillan, a philanthropist affiliated with the First National Bank, gave the hospital several three-story business buildings adjoining the hospital. One of the buildings had a floor with a south-facing porch, and that became the tuberculosis unit.  Patients were transferred from the city hospital, and Dr. Henry Longstreet Taylor became the medical director.

Because fresh air was an important part of treatment, patients spent most of their time on the veranda. In the winter, they were huddled in coats, hats, and blankets. When Dr. Taylor opened his private sanatorium at Pokegama, he moved some of his patients there. The Norwegian Hospital Society built a new hospital on Robert Street and University Avenue in 1913 and changed the name to St. Paul Hospital. After 1914, tuberculosis patients from St. Paul and Ramsey County were treated at the City and County Hospital (later renamed Ancker) on West Seventh Street.

Luther Hospital opened in 1903 in a mansion at John and Tenth streets in St. Paul. It was located in an area that used to be residential, and the Norwegian Hospital Society chose it because of its proximity to the railroad station and the business district. 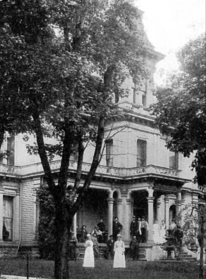