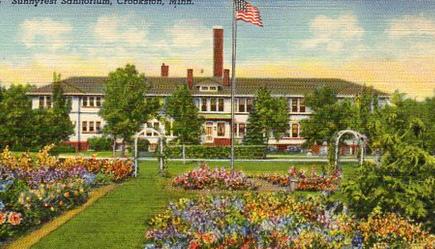 Sunnyrest Sanatorium was located about a mile from Crookston, Minnesota, and it served the residents of Polk and Norman Counties. It opened on June 1, 1916 with capacity for 26 patients that later expanded to 60 patients. The head nurse, Hulda Hultquist, reported that her chief difficulty was securing "good and reliable help."

Although it was a small sanatorium, it played a large part in anti-tuberculosis efforts in northwestern Minnesota. It employed a Field Nurse, opened an outpatient clinic, and affiliated with Bethesda Hospital in Crookston for surgical service. The sanatorium's location in the Red River Valley placed it near sugar beet farms that employed large numbers of workers from Mexico and Texas. In 1933, Sunnyrest's superintendent, Dr. W. G. Paradis, worked with the state epidemiologist to survey 184 migrant workers who remained in the community for the winter. Of those, 88 tested positive with tuberculin skin tests and seven were subsequently found to have active tuberculosis.

In 1954, the counties of Marshall, Roseau, Pennington, and Red Lake were added to the sanatorium district when Oakland Park Sanatorium closed. Sunnyrest remained open until 1967, being one of the last sanatoriums to close. Its outpatient department was remodeled as a tuberculosis outpatient clinic which continued to serve the member counties plus Kittson County. The clinic closed on December 31, 1977.