In the late 1890s, the Minneapolis School District and the Associated Charities Anti-Tuberculosis Committee operated small open-air schools for children at risk for developing tuberculosis. The schools were built on the “fresh air” model, operating with windows open even in the winter. One school was in a building at Third Avenue and Eleventh Street.  Another was in the Peabody Building near the Seven Corners area. Both were later consolidated into a building at Fourth Street and Ninth Avenue and named  the Thomas Arnold School. It was run by the city of Minneapolis and various health agencies. In 1913, it was renamed the Trudeau School in honor of Dr. Edward Livingston Trudeau, who established one of the early sanatoriums for tuberculosis in the United States. Students were served breakfast and lunch and took afternoon naps.  Nurses and doctors regularly checked on the students’ health. Some students were there only for a few months, while others stayed through their elementary school years. In the 1920's, the emphasis shifted to all students who were underweight or lacked vitality. The Minneapolis Health Department and Minneapolis General Hospital then cooperated in the construction of a new school, Lymanhurst, at a different location. The Trudeau elementary school closed in 1938. 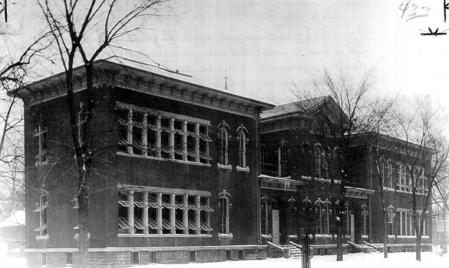 Note the snow on the ground and the wide-open windows.​